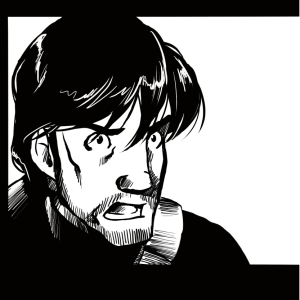 You know the “carrot on the end of a stick” metaphor? It means a reward (for morally upstanding situations) or a bribe (for morally ambiguous scenarios.) Basically.

I’ve always (for as long as I’ve held a pencil) had a problem with creating complete compositions, both in my studies and my finished works. I draw the person, and that’s usually it. And usually, it’s just the face. For me, the face is the most interesting, so why not? Thinking in terms of the whole page is a trick, man. It. Is. A. Trick. Besides, compared to the face, everything else is boring.

So to work around this “it’s not interesting, not drawing it” mentality, I tried using a kind of “carrot on the end of a stick” system to bribe/reward myself: alternate between drawing something interesting and something boring. This way, no drawing process was totally dull or mundane. It kinda works… but “alternating” started to mean simply drawing the interesting stuff a lot and the boring stuff a little. Sort of an improvement, but… not really. I still paid more attention to the face, and not, you know, the rest.

So my next approach is something a little bit more extreme. Gasp! After extensively exploring the work of Kenneth Rocafort, I’ve started developing this idea of 100% interest in a drawing. Every mark should be something appropriately engaging and meaningful. If I don’t feel interested in drawing the whole compostition…

Our environments and movements strongly impact the way we are perceived by others, and it’s the same for our fictional characters. A nightclub is different from a flowery meadow. A subway is different from a skyscraper. Crouching in a corner sends a message that differs from standing on a cliff. Or a stage. Clutter versus open space = claustrophobia versus breathing. Cracked and broken, clean and new.

In an effort to work on this “whole composition is interesting” thing, I’m doing a series of sketches of René, my comic character, and trying to use the environment, her body language, and her facial expression to convey an overall feel. Since her actual design has also finally reached a really cool level, I’m pretty excited to raise the rest of her world to the same standard.

I guess it comes down to this: your work is only as fun and thrilling as you make it. You can’t make it stimulating 100% of the time, but you can sure as heck try. What are some tricksy ways you get yourself motivated/even remotely engaged?

2 thoughts on “Sticks, and the Carrots On Them”

Thanks for visiting my blog. If you enjoy my work, please consider supporting me by following this blog, pledging on Patreon, or following me via social media! Want to connect? Always feel free to leave a comment or send a message. I'd love to hear from you!