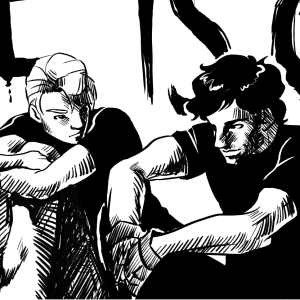 There is nothing more glorious for an writer than to create an intricate world of fiction with characters that have more depth and history than reality itself. When you get to throw in magic, science-fiction, and other such elements the limits are non-existent. I CAN DO ANYTHING!!!

And I usually do. I’m working on the story and script for René, my online-comic-in-progress and I decided to make some serious changes: I got rid of time-travelling, and I got rid of the aliens (well, I kept the characters, but they’re from earth for realzies now.) The reason was simply that those devices (aliens and time-travelling) didn’t serve a purpose beyond placing my comic more on the Star Trek end of the sci-fi scale. Which is cool, but superfluous. When I originally constructed the comics, the “aliens” gave “super powers” to René and her co-stars, but I eliminated the “super hero” element a long time ago because I wanted to focus on human integrity. So then the aliens primarily served as a “dispatcher” and a “bad guy.”

And the time-traveling was there so that the heroine could develop a romance with an Italian aristocrat from the Renaissance. Ahem. Moving on.

So I definitely didn’t need the aliens, and if I was writing a story that was focusing on different aspects of humanity, the “alien element” could potentially derail my story. As for the Italian Renaissance man… well, time-travelling is just flat-out tricky. It takes a lot of brain power to develop something that is consistent and believable, and I wasn’t getting the job done. I ditched the Renaissance (kept the Italian) and ditched the aliens.

All of the sudden, René was truly about the conflicting ideas humans have of perfection and survival. All of the sudden, this was about human values and morals. Not aliens or super powers or the Italian Renaissance.

All of the sudden, I actually had the story I’d wanted to tell all along. Without any aliens.

The disconnect was happening between my premise (aliens decided to perfect humans but ended up ruining them) and my intended story (humans relearn that perfection comes at a cost.) In order to repair the “damage” I had to reevaluate a) what I wanted to say, and b) what I wanted my readers to hear.

The hardest thing in the world for me is to give up on a crap-ton of brain work. I’d seriously rather burn a thoughtless drawing than forget an idea I never acted on. But then… lots of thinking doesn’t automatically guarantee lots of good thinking 🙂

2 thoughts on “Do You NEED the Aliens?”

Thanks for visiting my blog. If you enjoy my work, please consider supporting me by following this blog, pledging on Patreon, or following me via social media! Want to connect? Always feel free to leave a comment or send a message. I'd love to hear from you!